You are here: Home1 / TM Roses 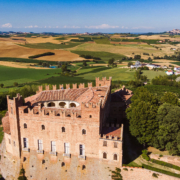 Monferrato is a rather large area, mainly hilly in nature, almost within the provinces of Asti and Alessandria. Its territory is divided into three distinct areas: Basso Monferrato, Monferrato Astigiano (where Tenuta Montemagno is located) and Alto Monferrato.

The whole area is full of places to visit of historical, artistic and, of course, eno-gastronomic interest. Talking about territory also means being an integral part of it, knowing it and promoting it. It is precisely for this reason that in Tenuta Montemagno Relais & Wines we decided to give life to an initiative to spread the discovery of Monferrato, creating routes to be explored easily and on a day, taking advantage of the favorable position of the Estate, for those who wish, as a place of departure and arrival.

These are itineraries in which we provide some suggestions on places to visit, but which are not to be considered exhaustive for everything you can see or do in the places indicated. We leave to the spirit of those who want to follow our suggestions stick only to what is described in the articles, or push their curiosity over the hill on the horizon. We then begin with the first itinerary that develops along a path of about 35 Km. touching the main villages of the area surrounding the estate.

For each of the places indicated, we have provided some historical indications, on the particularities to see and on the specialties to “taste”.

We hope that this initiative will be appreciated and we invite those who will do this and the next paths, to take photographs, maybe close to the places indicated in the article and to publish them on social channels with the hashtag #tenutamontemagno #DiscoverMonferrato

Have a good trip!

We start from the village from which the estate takes its name: Montemagno.

Looking at the view from the cellar court or the pool, the village is exactly to the southwest. Easily recognizable also from several km away, thanks to the crenellation of the ancient walls, the burg of Montemagno can be reached in a few minutes by car.

In Montemagno there is an imposing castle built in the 10th century. It is one of the best preserved castles in the province of Asti, now private property. The structure can be visited on request through the portal of the municipality of Montemagno.

The medieval layout of the village, characteristic of some of the most picturesque villages of Lower Monferrato, is still visible today. The first fortification then became the imposing castle crowned by Ghibelline battlements, from which radiate, from the remains of the walls, twelve alleys to draw the “old fence” of Montemagno. Each of the twelve alleys is indicated by Alley I, Alley II…. And constitute the old town.

You reach Piazza San Martino dominated by the Church of the Assumption and the majestic staircase with three terraces, in baroque style, which recalls the design of the famous staircase of Piazza di Spagna in Rome.

After visiting the center of Montemagno, it is a must to make a stop at the Pastificio Baracco, where they produce fresh pasta, pastry and condiments that are distributed daily throughout Piedmont. Do not miss the famous Agnolotti Monferrini (to try with white sauce), so Pastificio Baracco is known throughout northern Italy.

The restaurant La Braja offers typical regional cuisine and Monferrina, linked to the historical traditions of the place. The capacity of the room, in the garden area, is about 60 seats.

From Montemagno we move towards Casorzo, through the village of Grana on a road that allows you to enjoy the panoramic view of the Hills of the Marquisate and the villages with an evocative itinerary of historical, artistic, landscape and, of course, food and wine.

The origins of Casorzo go back a long time. The settlement and the nucleus of the Casorzese population have origins that date back to the Celtic era, when some cheese makers, called by Plinius – latin author and naturalist, Casurciulli, they came together for defense reasons to the high ground that took their name: Casurcium or Casurtium.

In the centre of the village you can visit the baroque parish church of San Vincenzo Martire, built in 1730 and situated in a dominant position on the site of the now disappeared castle. The churchyard houses a majestic horse chestnut bicentenary (among the monumental trees of Piedmont), portrayed in a picture preserved inside the church.

A must-visit is the Bialbero of Casorzo, a rare example of cherry grown on top of a mulberry tree. Both plants are alive and enjoy excellent health so much that every year they give a wonderful flowering diversified.

It’s an excellent panoramic area surrounded by the hills of Monferrato,  with tables and benches, perfect for a picnic, a break in the shade of the particular tree, or why not, for a different aperitif than usual with a pleasant glass of TM Brut 24 sparkling rosé.

Casorzo is also known for giving its name to the DOC appellation of a Malvasia: the Malvasia di Casorzo.

A native grape variety grown in a very limited area of the territory that encompasses five municipalities in total. Tenuta Montemagno is included in this territory and, in fact, we produce three sweet wines from this grape variety (Dulcem, Nectar and TM Roses), and the grappa Argentum XLV.

If you want to breathe the aromatic and delicate hints of this precious wine, we recommend four steps in the picturesque vineyards surrounding Casorzo.

Taking the panoramic road of the Marchesato Hills in Casorzo and proceeding northwards, you reach the village of Grazzano Badoglio. Here, in 961, the ancient Aleramica Abbey was founded by the first Marquis of Monferrato, Aleramo. The building, now the seat of a parish in the village is of particular architectural importance. Of the first building are still visible the Romanesque bell tower, the porch of the old parish house with balcony, the cloister, now renovated and restored to its ancient splendor and finally the octagonal apse.

Another site of historical interest is the tomb of Aleramo I.

Legend says that Ottone I, Emperor of the Holy Roman Empire, granted Aleramo as much territory as he had achieved to ride it in three days and three nights: this territory corresponds to Monferrato and the name derives from the words “mun” – brick and “frà” to shoe, that is the bricks used to shoe the horses that Aleramo rode.

Grazzano Badoglio is home to one of the giant benches of the Big Bench art project. The initiative, born in 2010 from an idea of the American designer Chris Bangle, aims to support the local communities, tourism and artisan excellence of the villages where these off-scale installations are located.There are numerous giant benches in Piedmont and Monferrato.

The giant benches in  Grazzano Badoglio, has a decided red color and was inaugurated in July 2020 and is located in the district Cornaleto.

The restaurant Il Bagatto is a destination to taste typical dishes, especially the main course and the Piedmontese “fritto Misto” – a recipe of sweet and salty ingredients, meat and sauces all fried, and other dishes of the regional cuisine.

Taking the road and going eastwards, in sequence, the provincial roads 30b, 42, 30 and 52, you reach Altavilla Monferrato, another village of this strip of territory. It is home to the Mazzetti d’Altavilla distillery, a company named after the Mazzetti family, founded 175 years ago and known nationally and internationally for its distillates.

The distillery can be visited (reservations are recommended) and is a recommended stop for lovers of grappa and liqueurs, but also for those who want to taste sweets and fragrant foods with the precious distillates of the company, or try the beauty creams with essences of grappa.

We continue our journey towards the last stage: Viarigi. It is located between Altavilla and Montemagno. The village is “clinging” to the hill and the houses and roads adapt to this feature, with stairs, galleries, steep bends, walls. Once the tramway used to pass here and to think about it today one hardly believes. From 1900 to 1935, in fact, this part of Asti was connected by rail.

Twenty-four kilometers of interurban line connected the city of Asti to Altavilla Monferrato and then continue the journey to the most important terminus of Casale Monferrato and Alessandria. The penultimate stop of this incredible stretch was Viarigi, a small village in Asti of just 800 inhabitants.

The symbol of Viarigi is the Torre dei Segnali – Tower of Signals,  of medieval origin, which dominates the village and the surrounding territory from above. Built around 1320, the tower is part of a network of defense and communication, based on a system of towers and points clearly visible from the surrounding hills (including Montemagno, Grana, Casorzo, Grazzano, Moncalvo and Rinco, to the north, Vignale, Camagna, Lu, San Salvatore to the south). The story says that in the past the inhabitants were advised in case of dangers or invasion with signals from the top of the tower, made using the fire and the mirrors.

The Torre dei Segnali is open every last Sunday of the month from April to October and has undergone numerous wall interventions over the centuries.

From its top you can enjoy the breathtaking view over the entire territory of Monferrato and Tenuta Montemagno that stands out from the hill in front.

After visiting the tower, returning to Tenuta Montemagno is a path simple and charming, since the route can be done between countryside paths or along the provincial road for a handful of kilometers.

The patron saint of Viarigi is Saint Agatha to which is dedicated the main church of the village where we can admire on the churchyard the statue of Blessed Priest Luigi Variaria, a Salesian missionary in South America and a great music enthusiast. Around Saint Agatha is wrapped one of the two popular legends of this country. Taking the Sentiero Cerola starting from the nearby Fubine you can go in search of the place where the Saint was probably buried. According to the popular narrative, Saint Agatha had several brothers and sisters. For each of them were built small churches and chapels.

In Viarigi, however, you will also hear about the “Magnetisà” and a particular priest who in the middle of the 800 made a lot of talk of himself ending up being condemned for heresy and removed from the community along with a mysterious Red Madonna. According to the beliefs Don Antonio Grignaschi, in addition to being a charismatic and good-looking man was able to move the hearts of his faithful thanks to a magnetizing fluid contained in a ring. For more than a hundred years we have tried to silence this story, but someone still tells it.

Monferrato is a land of emotions and history, so we hope that this little tour was as pleasant as exciting for all those who wanted to discover it.