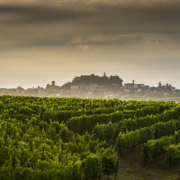 The Grignolino is a red indigenous variety of Asti and Casale areas, in Monferrato, Piedmont. Probably is one of the grapes that in this area finds its deep identity.  In the past years, in this region, it was synonym of “a glass of red wine”.

This wine is renowned since the Middle Ages with the name of Barbesino – from Latin Barbexinus and its existence attested by the XIII century citations , reported in the archives of Casale Monferrato.

Therefore, the actual name’s etymology could find its origin from the Asti dialectical noun gragnola or grignole, meaning the numerous seeds in the grape, which is definitely one of the trait of Grignolino. Another theory about the name’s origin, would derive the name Grignolino from the verb grigné – to grind. Luckily, this character has been disproved by the success of Grignolino wine in the oenological panorama, that identifies it as one of the most appreciated and eclectic wines of the Monferrato.

The first note of its existence, in Piedmont, referred that the home of Grignolino grape was the hilly area between the cities of Casale Monferrato and Asti, exactly where Tenuta Montemagno vineyards extend.

It is known that the Grignolino is a niche wine, with a deep roots in the Piedmontese wine tradition, but its production is a demanding process. The vineyards are planted and cultivated  in the Monferrato territory, because of the soil composition and the Terroir. Actually, in the past, some zones of the northern regions of Lombardia and Veneto were cultivated with Grignolino vineyards, but, despite the careful vinification processes and the research for the highest quality, the Grignolino became the grape of our territory – the Monferrato, formed by rugged lands and caressed by the mild southern wind that , together with the peculiar soil composition, both give it delicate aromas and structure.

For the agronomist and the oenologue of Tenuta Montemagno, every new challenge is translated into commitment and dedication. In such case, the goal is clear: making of a wine with a “diminutive name” a  great wine.

Actually, Tenuta Montemagno produces Ruber, Grignolino d’Asti DOC, 100% Grignolino grapes, with the passion and the deep experience that is typical of its production and philosophy .

The rubin red color of Tenuta Montemagno Grignolino d’Asti inspires the name of Ruber: this wine is  elegant, with a marked personality, an ample tannic spectrum on the palate, a dry taste and a very interesting persistency.

In every glass of Grignolino, we find the important oenological story of Piedmont. Ruber is a red wine of friendly character , able to let us enjoy the aperitif – when  served lightly  chilled, and the classical recipes of the Piedmont’s cuisine, as the medium seasoned cheese, the Muletta – typical salame of Monferrato, and the Agnolotti – stuffed pasta.

The secret to valorize its organoleptic structure is to drink the Grignolino with dishes that don’t cover its aromatic notes and delicate balance.

Ruber is available for purchasing on our ONLINE SHOP 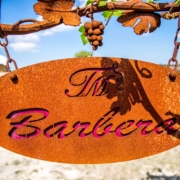 Our Metodo Classico are made from Barbera grapes harvested early, hand picking and with a careful grapes selection.

The Barbera is a versatile and  charming variety, capable of being the protagonist: the TM24 and TM36 Brut, are both another expression of its potential. They are sparkling wines born from the synergy of intuition and innovation. The idea  to have the Metodo Classico of 100% Barbera that refines on yeasts for 24 (TM24) and 36 months (TM36) is astonishing.

The perlage of TM Brut 24 is elegant and fine; the bouquet is intense, delicate and generous, notes of yeast and delicate hints of crusty bread, overtones of freshly picked flowers and wild berries. On the palate it is fresh, lively and sapid, with an excellent underlying acidity and clearly expressed minerality. The finish presents light notes of wild plum and currants. Therefore, the peculiar traits of  Barbera – bouquet and acidity, are well present almost as if  weaving the warp on which the other sensations intertwine.

TM Brut 24 has been rated 92 point by Wine Enthusiast, one of the most eminent international wine magazine.

If the TM Brut 24 is “unexpected” because of its structure, color and pleasantness, the Tm Brut 36 is surprising and unique, enough to be awarded with the Gold Medal – category Sparkling Rosé, in the International wine Competition The Global Sparkling Masters 2020.

The bouquet reveals an intense fragrance,  delicate and generous. Notes of yeast and crusty bread, overtones of freshly picked flowers and wild berries. On the palate, it is fresh, lively and savoury, excellent underlying acidity with clearly expressed minerality and a light finish of wild plum and currants.

In this sparkling too, the characteristics of the variety are the texture on which the other perfumes and aromas are waived on. TM24 and TM36 both are the example of how the Barbera grape is a precious and versatile grape, a storyteller of the region. In these sparkling, tradition and innovation are perfectly combined and we can say that TM24 and TM36 are a great examples of wine that becomes sparkling and then, comes back to wine.