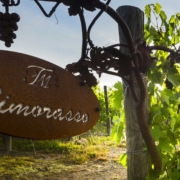 The idea of naming the wines of own production with Latin names was born in Tiziano Barea, Tenuta Montemagno’s owner, from the desire to emphasize the identity, history, tradition but above all,  to connote the great evocative force.

The Timorasso, already fascinating for its history, its typicality and its character, becomes among the white wines of Tenuta Montemagno assortment, what best represents the Sun Force – Solis Vis:

Then, it becomes THE white, among the white wines.

In this part of Monferrato, in Montemagno, formed by gentle hills characterized by marl, at an altitude of 260 meters above sea level, the Timorasso finds a fertile soil and suitable for cultivation also for the high mineral and saline content, legacy of the presence of the sea of millions of years ago.

The exposure of the vineyards south/south-west, the vine’s cultivation system in guyot, the limited yield per hectare, manual processing and treatments in respect of the environment, ensure the quality in the vineyard. In the cellar, the production process involves the vinification in white, with soft pressing of the grapes and subsequent fermentation in stainless steel, where the wine ages on the lees for a few months. After bottling, Solis Vis ages in bottle for some time.

Solis Vis is a wine of character, identity and out of the chorus of whites, for its marked mineral notes, for its structure and body, for its persistence.

The vintage that we have available is 2020: what a surprise and what a charm!

The harvest opened at the beginning of September about a week earlier than the historical average.

The values of the sugar gradations and the acidity levels have proved to be on average lower than in the past, but have remained stable in the wine making thus ensuring an extreme balance between the two components, fundamental result for this type of wine.

Solis Vis 2020 has a bouquet of ample floral notes, of acacia honey, hawtorn that, gently and slowly evolve and give space to the minerality typical fo Timorasso grape, enriched by th ehints of flinstone, which is the most distinctive fragrance of this wine. In the mouth it maintains freshness and sapidity, well balanced by moderate acidity. The palate is pleasing, persistent and rich, allowing the perception of all the typical gustatory notes of the grape.

This is Tenuta Montemagno’s interpretation of Timorasso: the autochthonous vine that is so unique as to be called the Barolo of whites, so authentic that it does not compromise with its own identity.

It is contemporary, innovative and, above all, international.

Solis Vis, the wine made with Timorasso grape by Tenuta Montemagno, year after year gains worldwide medals and prizes as the confirmation of the careful work in the vineyards, conducted by the agronomist Maurizio Cerrato and the meticulous vinification process under the supervision of Gianfranco Cordero, the enologist, in cellar.

The appreciation of the peculiarities of this wine expressed by the fans and also the critics is the proof that Tenuta Montemagno went for the right choice to cultivate this rare and challenging grape in this corner of Monferrato. The consumers discover this wine especially for its versatility with the food pairings, that are unusual and astonishing.

The menu of the restaurant “La Civetta sul Comò”, located in the elegant Torre salon of Tenuta Montemagno, proposes recipes that are able to valorize our wines’ production and to lead you in a complete immersion of the Monferrato’s tastes and perfumes.

Among the innovative recipes of the executive chef Giampiero Vento, we suggest to try as starter the fish dish of Palamita in carpione (marinated), with green sauce and crispy salted almonds.

The Palamita is a fish of the Mediterranean Sea – “Mare Nostrum”, very rich of Omega3; the meat is very tasty, softened by the carpionatura and enhanced by the scent of almonds.

The minerality typical of the Solis Vis exalts this fusion of tastes and its important structure enhances the savor of this sea fish in carpione.

Another great pairing , maybe more classic but always appreciated, is together with the Vitello Tonnato – veal in tuna mayonnaise, reinterpreted by the Chef.

Searching among the first dishes, another crossing food combination is with a pasta seasoned according to the Southern Italian regions ingredients: spaghetti with roasted tomatoes, Shrimp Mazarese and buffalo cream.

The bouquet, the elegance and the firm structure of our Timorasso  perfectly boost every single ingredient, balancing the traits, the long lasting on the palate and inviting for the another sip.

The summer season is approaching and our journey of taste can be inaugurated by a recipe that reminds us the seaside scents, the sunshine, the beaches: Salted cod in cooking oil, citrus fruit and bell pepper in sweet and sour.

A dip in the colors and flavors of our peninsula, greatly represented by the Timorasso colors’ flag: the straw  yellow of the grape and green wax seal on the Solis Vis label.